Last month, a member of Focus E15 campaign and the Radical Housing Network went to Belgrade in Serbia to join the European Action Coalition For the Right to Housing and to the City. The coalition is a group of housing activists from all over Europe and beyond who regularly meet with the intention of unifying housing struggles and strengthening demands.

The main topic on the agenda was the international day of action taking place in October and how to raise awareness of the ‘financialisation’ of housing. ‘Financialisation’ is the transformation of housing into a commodity, not only on the real estate markets, but on financial markets, as housing is regarded as a way to make money and not an essential social need or a basic human right.

Over a period of a few days, the coalition held talks and discussions about occupations and eviction resistance and explored how to build grassroots activism from a need or a struggle in the community. There were groups much like Focus E15 campaign, who are working closely with their local communities, some of whom are disproportionately affected by housing issues, such as the Roma community in Romania and Portugal. Some housing groups, in France and Germany  for example, were campaigning about similar issues to us, such as diminishing social housing and forced relocation. On the other side of the spectrum, progressive housing movements in countries such as Greece and Cyprus spoke about their struggles in a brutal system which has no social housing whatsoever and explained about their daily fight against dispossession and evictions in the aftermath of the financial crisis.

Our host group in Belgrade, ‘Ne da (vi) mo Beograd’, is a strong and well-known campaign opposing a huge and lucrative sell-off of public land at the city’s waterfront. The name in Serbian is an untranslatable play on words. The brackets suggest two sentences, one meaning ‘We’re not giving Belgrade away’ and the other ‘Do not sink Belgrade’.

We were taken on a guided tour and we were able to witness the shocking disparity between the luxury developments along the waterfront on the one hand and the working class communities under constant threat of eviction, left to languish in slum housing, on the other. We also visited a housing estate in a working class district that was built during the former socialist Yugoslavia era. Here we were introduced to older citizens and families living in a housing complex that was originally socially-owned housing, but is now in private hands.  This is due to a series of catastrophic changes to housing law which were introduced by the government after the collapse of former Yugoslavia in the early 1990s.

Housing cooperatives were originally owned by the people of Yugoslavia, meaning that everyone had a ‘share’ in them, and those who lived there worked for the upkeep of the housing in return for nominal rent and amenities. When Yugoslavia was destroyed, housing was taken over by the government, and eventually a principle similar to Right To Buy was introduced until most of the housing stock was sold off to the private sector. 98% of housing in Serbia is now privately owned, whereas previously around 50% of housing was socially owned.

Unsurprisingly, the cooperative that we visited has fallen into the hands of dodgy private owners. The landlord had raised rents until they became unaffordable for tenants and as a result, the community has been left to fend for themselves. The government is attempting to evict them all and will not support or re-house them. The people have nowhere else to go, and as they told us, many are too ill or too old to go out to work in order to pay the high rents in the private sector.  Yet at the same time, the government is spending millions on a huge private venture, building luxury apartments, hotels, malls and tower blocks. Outrageously the government is building over a useful railway track and demolishing the municipal housing of railway workers who had lived there for years.

Such contempt and disregard for the needs of the community is something very familiar to us in Newham, East London, where the Focus E15 campaign is based. You only have to walk a few metres out of Stratford station to see the luxury monstrosities growing across the skyline scattered amongst the Olympic Park. And right beside it, Carpenters Estate, where three huge tower blocks of social housing lie empty, save for a few sparse lit up windows, highlighting the residents who Newham council has been unable to evict. The skyline is visually emblematic of the social cleansing going on here and throughout London. Meanwhile, Newham is the worst borough for homelessness in London, and you can see more and more rough sleepers in the shopping centre, or huddled on the few green spaces left around the area, and this doesn’t even account for the high numbers of invisible homeless that we know are living in sub-standard temporary accommodation or sleeping on the floors and couches of friends.

To return to Belgrade, what is heartening about the community that we met there is that they have not given up and continue to resist evictions by joining ‘Don’t Sink Belgrade’ on their demonstrations against the privatisation of the waterfront, helping to mobilise thousands of protesters in the streets. They are a real inspiration and show us what community organising can achieve. The whole of Europe is in the grip of a capitalist crisis, a neo-liberal disaster and we must ensure that we continue to fight for our human right to have decent homes! 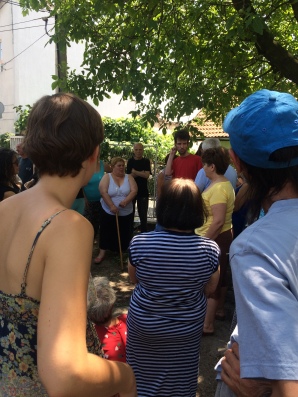