Newham council has withdrawn the offer of temporary accommodation in Birmingham to a single Mother of 3 and cancelled her housing appointment on Friday 29 May, therefore she does not need people to stand with her at Bridge house.
We are awaiting news as to where she will be housed next by Newham council and hope that she will now be able to settle and bring up her children with support from her wider family.
Thank you for all the messages of solidarity. We will pass them on to this family.
It is clear that people need long term and properly affordable housing.

Social housing not social cleansing! Stop sending mothers and children away from their support networks!

Last year, a single mother from Newham, who has 3 children, was moved by Newham council and housed outside of London in Hertfordshire. Now, over one year later, her temporary contract has ended and she has been offered yet another short term contract, but this time in another new place outside of London, in an poorly maintained house in Birmingham, which has rotting cupboards and broken gates. How many times will she be shoved from pillar to post?

This mother’s plight shows the utter insecurity of current housing policies and the disruption that is caused by social cleansing. Single mothers face enough pressure without housing insecurity thrown in on top. Their children’s lives are also being adversely affected by not having a secure and stable home environment. This is how social exclusion begins as families are unable to fully take part in their communities due to constantly having to move, they are left isolated when placed 100s of miles away from their wider family and support. Children lose friendships due to being forced to change schools time and time again.

The Focus E15 campaign supports the right of single mothers to bring up their children in a long term secure environment near to their support networks and extended families. Stop playing political football with their lives.

Please support this mother who is asking to be housed near to her support networks in London or to be left to stay in Hertfordshire where her oldest child is at school. You can give support and solidarity  for this mother at her housing appointment on Friday 29 May, 1pm. Come and stand outside Bridge House 320 Stratford High Street, Stratford E15 1EP in solidarity.

Tell Newham council that single mothers deserve our support and should not be left stranded!

Join the Focus E15 campaign this Friday to  support  Nmah Kamara, her husband and children who have been evicted from their home and face being moved out of Newham.

One of the children writes clearly and movingly how this will effect the whole family: 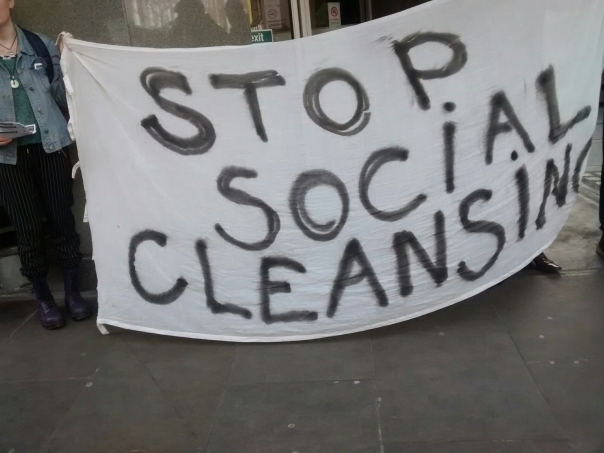 “After a long complicated housing story we have an Eviction Notice for the 22 May 2015 to leave our present and only accommodation at 8am but with nowhere to go.
If the Council relocate me from Newham at this stage of my life I will definitely fail to complete my education which is my future due to the physical, emotional and psychological transition I have to undergo, which is also true for my sister.
I have lived in Newham since my parents moved to Britain. My mum works for Newham Council.
My sister, brother and I have completed primary and secondary schools in Newham, we are now in further education (currently busy with projects and exams) and through UCAS we have already enrolled at Universities in London starting from 2015/16 with the hope that I will still live in Newham.
We have our friends and we are well associated with our borough making it very difficult to move away without affecting our continuity of education and network support”.

On 13 April, Jasmin Stone of Focus E15 campaign was arrested on suspicion of squatting in a raid organised by Newham council and police. There followed a loud and militant demonstration at the police station where she was held and she was bailed to attend a police station in mid May. We have just heard that no charges will be brought against her.

The lead up to the police and council action was Focus E15 campaign supporting Jane Wood who had lived in Newham council accommodation, east London, for almost 21 years. On 24 March she and her 14-year-old daughter were evicted by bailiffs for rent arrears resulting from complex personal and medical circumstances leading to her Employment Support Allowance being stopped. At the last minute, when her family rallied around and offered to pay the outstanding debt, the Labour council refused to take the money, call off the bailiffs or allow Jane to keep her home.

Newham council is led by Labour Mayor Robin Wales, an unashamed advocate of gentrification, supporter of sanctioning and kicking out the poor and most vulnerable. Under his rule, 400 homes on the Carpenters’ Estate remain empty, while homeless people whom the council is compelled to house are forced to move out of London.

This is an example of political policing and a targeted arrest in an attempt to silence and intimidate political activists.
We will not accept the criminalisation of those who fight for social housing and against social cleansing.

Focus E15 campaign will be celebrating this victory on the weekly Focus E15 stall this Saturday 16 May from 12-2pm on The Broadway, Stratford E15, outside Wilko’s.

Come and join us.