Congratulations to the ‘Balcony 4’ and Focus E15 campaigners  who successfully dropped banners from a disused, sold off and boarded-up police station in East Ham on Sunday 10 July 2016, to highlight the current crisis in housing.  This action took place during the Mayor’s Newham Show (will he call it the Robin Wales Show next year?!) – which is a two day council-sponsored event that takes place in a local park in East Ham.  Focus E15 campaign was determined to let people know what is really happening in the Labour controlled borough of Newham where Mayor Robin Wales is still at the helm. As the Mayor’s show took place, this action unfolded.

The background  story is that the campaign has protested during the mayor’s show over the last two years. In 2014, Robin Wales over-reacted to young mothers talking about rights to housing  during the show and a complaint was lodged against him. He faced the Newham Standards Committee and was found guilty of a breach of the code of conduct (watch from 1.45: http://youtu.be/gsPxancNiqk). Then in 2015, the council ordered private security to stop campaigners handing out leaflets during the Mayor’s show and had campaigners forcibly removed from the park in a heavy handed manner. (http://youtu.be/SpbnD9RzuQ0). 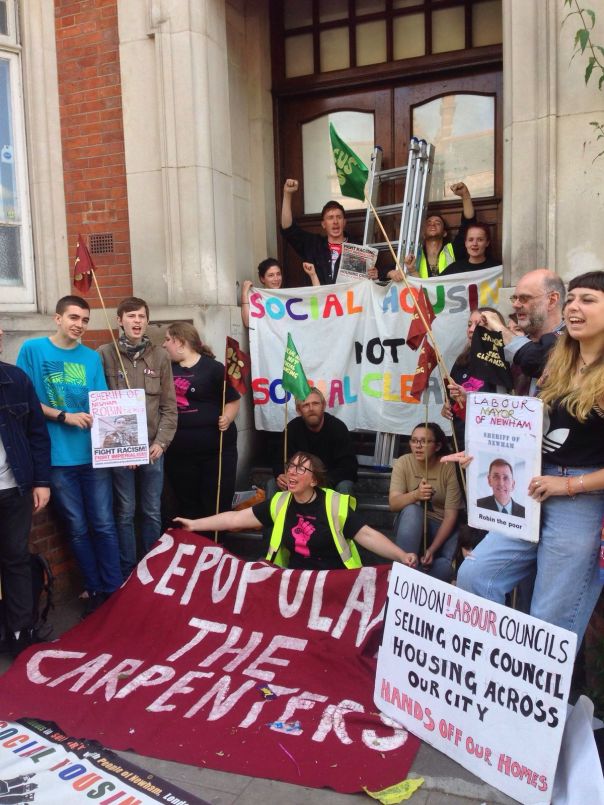 During the Mayor’s show this year, one of Newham’s many empty buildings became a target.  Three large banners were unfurled from the balconies of a boarded up police station as a crowd gathered down below. The banners read “Newham – hundreds of empty homes“; “Room for everyone, No room for Racism“; “Stop social cleansing, keep us in London“.  Campaigners from the Revolutionary Communist Group, Feminist Library, The Green Party, Sisters Uncut, Boleyn Dev 100, Tower Hamlets Renters and passers-by took to the mic to express their disgust at the amount of properties left empty by Newham council and demanded the reopening of the 400 empty homes on the Carpenters Estate. Many drivers hooted in support and passers-by joined in the protest and gave out leaflets.  One campaigner explained:

“…If they leave buildings empty like this police station – we will use them to make a political point. The housing crisis is driving people to despair and there should be no empty buildings whilst people are left to rot on our streets. We are also fed up of politicians blaming migrants for the housing shortage – it is just a dangerous lie -which is why one of our banners says – No Room for Racism…”

Whilst Robin Wales and his entourage were swanning around the park, the reality for thousands of people living in Newham is increased insecurity: rents are always rising, council homes are  being sold off and more people are living in overcrowded, appalling temporary accommodation. 35% of Newham residents earn below the London Living Wage, yet the mayor has a salary of £80,000 and last year the same amount again was spent on his expenses.

Hundreds of messages of support for the temporary occupation of the police station’s balconies came flooding into the campaign. The Balcony 4 came down at end of the protest to applause and loud cheers from everyone on the ground.

Focus E15 campaign would like to say a big thank you  to all those who supported this action, with  your presence, your cameras and your voices, and to the speakers from East End Sisters Uncut, Revolutionary Communist Group, Feminist Library, Boleyn Dev 100, Tower Hamlets Renters and Newham Green Party. Another successful action, working together and challenging Newham Labour Council!

The campaign  would also like to send our solidarity and congratulations to East End Sisters Uncut for their current occupation of empty council homes in Hackney as they highlight the cuts to services for domestic violence and the closure of refuges. Please support their occupation over the coming days and weeks.

Focus E15 campaign’s next public meeting is on Saturday 2nd August 2016 at Sylvia’s Corner, 97 Aldworth Road, E15 4DN, to discuss ways forward for the campaign. Join us at 2.30pm

Focus E15 campaign will be setting up a street stall at Newham Town Hall this Sunday at 3pm to shine a spotlight on Newham’s housing crisis during the Mayor’s Newham Show. Last year campaigners were forcibly removed from the show as they spoke out against evictions and social cleansing. This year we will celebrate our resistance by setting up a special street stall outside the town hall. During the street stall we will be speaking out against evictions and highlighting that:

In 2015, 244 families from Newham were permanently sent out of London, with Newham Council citing that there was no space or money to house them in the borough.

If these issues matter to you, come and join out street stall outside East Ham town hall. If you have not been to the street stall before, just come and say hello if you are passing to go to the Newham Show. Join the campaign to demand that the empty properties in Newham are opened up to those who need them most. Put human being first! Stop sending people out of London.Decent homes for everyone!
Join the special street stall this Sunday and make your voices heard with Focus E15 campaign.