March Against the Housing Bill!

(there will be no Stratford stall outside Wilko’s).

Travel to the start together… meet Focus E15 at Stratford station at 11am (outside the exit that leads onto the bus station, near the train statue).

See below re other events and actions related to opposing the Housing Bill.

Land of the Three Towers

Congratulations to FYSA theatre company for the latest E15 performances. Reviewed below and more performances scheduled for later this year.

Focus E15 campaign stall 12-2pm on the Broadway outside Wilkos in Stratford.

We will be supporting the Radical Housing Network’s call for action against the housing bill. Come and speak out, leaflet  and use the open mic. Make plans, talk to people on the streets to make the housing movement grow. All welcome. Take part in East London Radical Assembly’s stall crawl and get involved with the housing movement in your area.

Come and hear a speaker from RAMFEL – Refugee and Migrant Forum of Essex and London  www.ramfel.org.uk/

Discussion in particular about the Immigration Bill and the impact on housing and planning future events.

Big Thank you to Simon from Architects for Social Housing who spoke about the housing bill at the last meeting.

26 January: 2nd Reading of the Bill in the House of Lords (first chance to discuss areas where amendments are needed, so start lobbying Lords before this date). Defend Council Housing lobbying Southwark Council offices at 160 Tooley Street (6.00pm).

10 February: Estimated date of Committee Stage of Bill in House of Lords. Detailed examination of the Bill lasting around two weeks.

13-14 February: We Love Council Housing, weekend of actions against the Bill called by the Radical Housing Network for the Valentine weekend.

24 February: Estimated date of the Report Stage of the Bill, when the House debates any committee amendments. This is shortly (that day or the following week) followed by the Third Reading, the last chance for the House to vote on amendments. Any amendments are then sent back to the Commons for consideration. Then the Bill is sent for Royal Assent.

5 May: Elections for London Mayor.

With the imminent implementation of the Housing Bill, Focus E15 Campaign has been reviewing and asking what this legislation means for the growing housing movement.

What is clear from the hours spent at our weekly street stall in East London is that a lot of people do not know what this bill is about. This should not come as a great shock because our experience with key housing information is that the media, local councils and the government cover up the realities of this manufactured  crisis in housing -after all  to be educated is to be free, right?  If the public truly knew and recognised the amount of homes lying empty in their street, borough and country, how long would the propaganda about the need to build more homes, but not being able to due to austerity, really stand up?

The question is how does the housing movement move forward with a deliberately uninformed public as the most  draconian housing legislation in recent British history gets pushed through parliament? Of course our job is to inform people, but what else can we do to convince people to take the action that is needed to repel this bill, boost the housing movement and put the working class on the front foot in the historical fight for suitable housing? We need civil disobedience and a refusal to cooperate with this daylight robbery. We need those forced with massive council rent hikes to refuse to pay them, to be prepared to stand in front of the state in the courts, and to win. 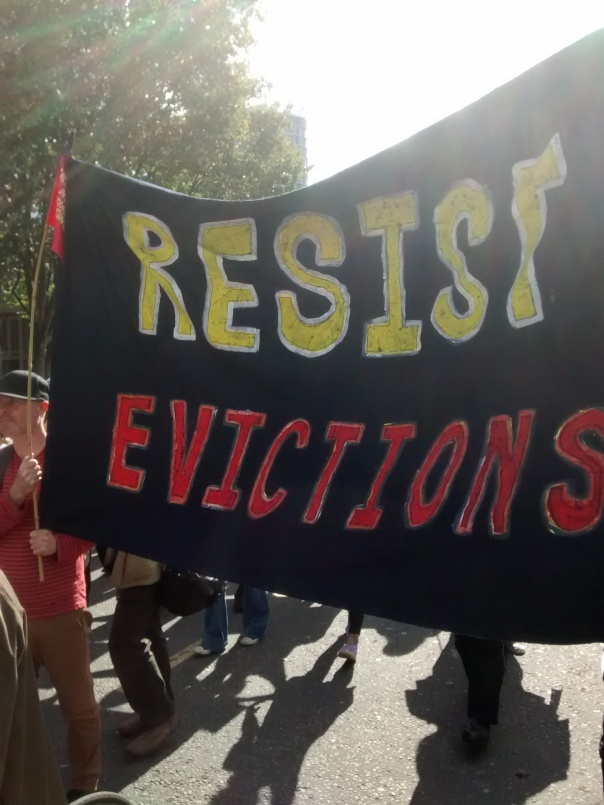 Focus E15 campaign will be on the March Against the Housing Bill on the 30th January.  This will not be a march which will stop the Housing Bill.  People are not yet coming out  onto the streets in great numbers.  However, let this be a march to show people that when the reality of the housing bill drops through their letter box, their best chance is to join the housing activists they glanced at in the newspaper and in  their news feed, because there will be people who are ready to fight with them.  After all, this was in essence how our campaign began.

Recently at our bimonthly  campaign meeting, we had an excellent presentation about a study looking at the similarities between our campaign and the Mothers of the Plaza de Mayo (the mothers of the disappeared children in the 70s and 80s in Argentina).  We heard that mothers first challenged the ‘problem’  – by writing letters, complaining to MPs and local representatives and it was when this process failed that the mothers, in both campaigns, became politicised.  Also, significantly, in both struggles there were political activists and others working in the campaign from the start, (some affected by the issues directly, some not) who were ready to give their support -which in turn gave political confidence to the mothers. This helped to give  these campaigns their weight, strength and longevity – the Argentinian mothers continue to fight to this day.

Those that attend the march on the 30th January should be this political weight in the coming period. When the ‘solutions’ the working class are offered fail – then we can be sure 2016 will be the year of unrest the housing movement needs.

The Housing and Planning Bill 2015 will put an end to the possibility of decent housing for all; it will see the end of council housing and social housing, while encouraging an unregulated corrupt private rental sector.More and more people will be forced into overcrowded, damp, unsafe housing, taking Britain back to the conditions of over 70 years ago, before the modern welfare state was developed.

We must get together and fight for the right to decent, affordable, secure housing.

Join the Focus E15 campaign on the march to Kill the Housing Bill which is being called for by Lambeth Housing Activists on Saturday January 30th.