Resistance is necessary and together it is fun.

On Saturday 12 August, Focus E15 campaign and friends will be marching for safe and secure housing in Newham, east London, and demanding that Newham council repopulate the Carpenters Estate immediately. Newham has more people registered homeless than anywhere else in the country and 25% of people are living in overcrowded conditions. People are being decanted, evicted, abandoned and forced out of their homes at catastrophic rates; in England someone is threatened with eviction every 90 seconds.

Join us at 12 midday at Ferrier Point, Forty Acre Lane, Canning Town E16, marching, dancing, singing, drumming our way to Tanner Point, Pelly Road, Plaistow E13 for 1pm for a speak out, and then making our noisy militant way to the Carpenters Estate in Stratford E15 by 2.30pm for a knees up with the residents. Come to the whole event or at any place along the way. By 2.15pm we will be at Stratford Old Town Hall for the last bit of the march to the Carpenters Estate.We are marching because rough-sleeping and homelessness is on the rise and social cleansing is a daily reality. Luxury apartments continue to be built and council homes are being demolished.This is making people ill and it is a national mental health emergency. The fire that ripped through Grenfell Tower on 14 June was not an accident but the devastating consequence of housing policies marked by systematic degrading of council estates that are being demolished or ‘regenerated’ for profit.

In Newham, Ferrier Point, Canning Town, Tanner Point, Plaistow and Nicholls Point, Stratford all have cladding that has failed fire-safety tests. Newham council said it was the higher quality cladding than that used on Grenfell Tower, but at the end of June announced that contractors are assessing to see how quickly it can be removed. While extra security patrol these blocks, and smoke alarms and fire doors are in place, there has been no move to inform residents of the next steps. Ferrier Point’s cladding was fitted in a £3.5m contract with Rydon as part of an overall £8.5m refurbishment in 2015. Rydon subcontracted the work to Harley Facades Ltd. Rydon and their subcontractors were involved in refurbishing the Grenfell Tower. 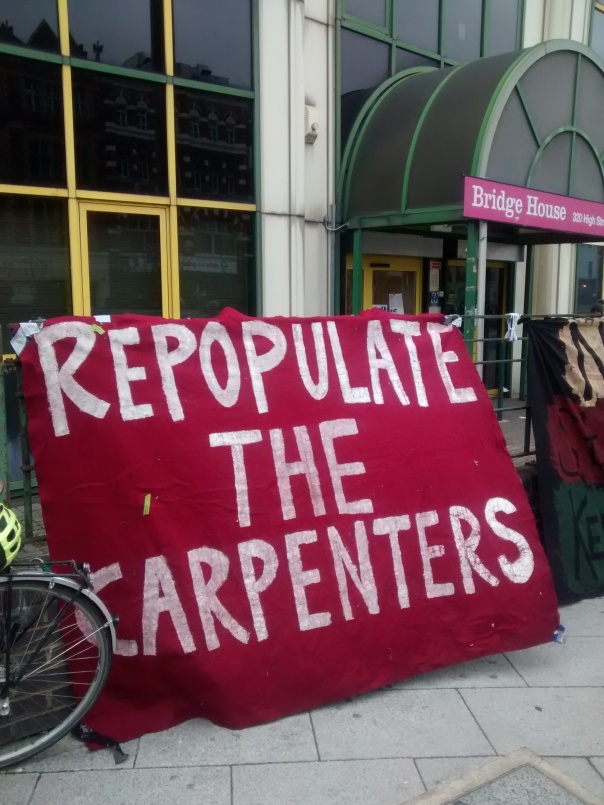 Meanwhile, in Stratford, in the shadow of the Olympic stadium, three other tower blocks on the Carpenters Estate lie almost empty. The estate has over 400 empty homes, due to people decanted by the council over the last decade, a case of Olympic regeneration for the rich, eviction for the poor. This is the reality of Robin Wales’s Labour borough of Newham, now spending the staggering equivalent of 125% of council tax on debt repayment, after reckless acquisition of LOBO loans and borrowing from the banks has left the council with £563m debt. The Carpenters Estate is marked for regeneration or demolition or both. We stand shoulder to shoulder with the resistance of the residents.

Join us at any point  on Saturday 12 August to raise all these issues in the sixth richest nation in the world! We must be clear that adults and children should not be left to rot in substandard overcrowded slum-like housing, in temporary or emergency accommodation. We must demand safe and secure housing for all.

On 21st May, to mark the end of Mental Health Awareness Week, Focus E15 Campaign held a demonstration in Stratford to force a spotlight onto Newham council who have left empty homes boarded up on the Carpenters Estate  and to make a link that the current housing crisis is having an adverse effect on people’s mental health.

Many people took the opportunity to use the open microphone. Speeches, live music, chanting and an impromptu march  highlighted the link between mental health and housing insecurity. The point was also made that taking collective action is empowering and good for our mental wellbeing.

Passerby stopped to hear how people are being decanted, evicted, abandoned and forced out of their homes at catastrophic rates  – currently someone in England is threatened with eviction every 90 seconds. Newham has the highest number of households in temporary accommodation of any London borough and the devastating consequences that housing conditions are having on people’s mental health should be obvious. To constantly worry that the roof over your head will not be there tomorrow is traumatic. The stress and isolation that comes from housing insecurity is causing a mental health crisis.

Dangerous and overcrowded accommodation; temporary housing, isolation from family and friends, evictions, homelessness, social cleansing, children out of school, job losses: these are the issues so many people are facing and they are making people sick. As people are evicted from their homes and socially cleansed out of London, they are not only being forced into places that are making them ill, but they are cut off from the very support networks that keep them healthy.

Thank you to everyone who stood together in our community to raise these important issues. The fight back continues. Collective action makes us stronger and gives us back our mental health! In the words of a campaigner on the day:

‘No political party has any solutions. Families are being evicted every day. People are getting ill. Children are suffering. This is a rich country but you wouldn’t know it if you looked at what is happening to the most vulnerable people and their housing. We must stand together to avoid drowning.’

With the imminent implementation of the Housing Bill, Focus E15 Campaign has been reviewing and asking what this legislation means for the growing housing movement.

What is clear from the hours spent at our weekly street stall in East London is that a lot of people do not know what this bill is about. This should not come as a great shock because our experience with key housing information is that the media, local councils and the government cover up the realities of this manufactured  crisis in housing -after all  to be educated is to be free, right?  If the public truly knew and recognised the amount of homes lying empty in their street, borough and country, how long would the propaganda about the need to build more homes, but not being able to due to austerity, really stand up?

The question is how does the housing movement move forward with a deliberately uninformed public as the most  draconian housing legislation in recent British history gets pushed through parliament? Of course our job is to inform people, but what else can we do to convince people to take the action that is needed to repel this bill, boost the housing movement and put the working class on the front foot in the historical fight for suitable housing? We need civil disobedience and a refusal to cooperate with this daylight robbery. We need those forced with massive council rent hikes to refuse to pay them, to be prepared to stand in front of the state in the courts, and to win.

Focus E15 campaign will be on the March Against the Housing Bill on the 30th January.  This will not be a march which will stop the Housing Bill.  People are not yet coming out  onto the streets in great numbers.  However, let this be a march to show people that when the reality of the housing bill drops through their letter box, their best chance is to join the housing activists they glanced at in the newspaper and in  their news feed, because there will be people who are ready to fight with them.  After all, this was in essence how our campaign began.

Recently at our bimonthly  campaign meeting, we had an excellent presentation about a study looking at the similarities between our campaign and the Mothers of the Plaza de Mayo (the mothers of the disappeared children in the 70s and 80s in Argentina).  We heard that mothers first challenged the ‘problem’  – by writing letters, complaining to MPs and local representatives and it was when this process failed that the mothers, in both campaigns, became politicised.  Also, significantly, in both struggles there were political activists and others working in the campaign from the start, (some affected by the issues directly, some not) who were ready to give their support -which in turn gave political confidence to the mothers. This helped to give  these campaigns their weight, strength and longevity – the Argentinian mothers continue to fight to this day.

Those that attend the march on the 30th January should be this political weight in the coming period. When the ‘solutions’ the working class are offered fail – then we can be sure 2016 will be the year of unrest the housing movement needs.

The Housing and Planning Bill 2015 will put an end to the possibility of decent housing for all; it will see the end of council housing and social housing, while encouraging an unregulated corrupt private rental sector.More and more people will be forced into overcrowded, damp, unsafe housing, taking Britain back to the conditions of over 70 years ago, before the modern welfare state was developed.

We must get together and fight for the right to decent, affordable, secure housing.

Join the Focus E15 campaign on the march to Kill the Housing Bill which is being called for by Lambeth Housing Activists on Saturday January 30th.

A march against evictions awoke the heart of Stratford in the East End of London last Saturday when local people, political groups and campaigns took to the streets to demand decent housing for all. The march was militant, diverse and empowering, full of noise, speeches and lively chants. It was led by the original Focus E15 mothers and their families plus others who face being shoved out of London due to a manufactured housing crisis. A local mother, Bianca Ford who is being evicted  with her children on October 12 in Redbridge said she had never been on a march before but marching with others who care about housing issues had given her the confidence to speak out. Afterwards she said that the march had been a ‘real buzz’. Residents from the Focus E15 hostel were also uplifted by the gathering of people and felt like they could speak out about their current housing fears. This shows that our active solidarity brings courage to people, inspiring them to take action.

Ghassem from Asylum Clinic spoke about  migrants, refugees and asylum seekers and the racism and discrimination they face in housing. Class War stormed into Foxtons letting agency, drawing attention to rip off house prices, agency fees and high rents. They were congratulated for taking this action by many on the march. People also became angry and vocal when we passed by Bridge House, Newham’s homelessness housing office: a homemade banner was hung over the entrance demanding Newham Labour council stop social cleansing. Squatters rights were also championed and Sisters Uncut made the links between housing security and the importance of fighting against domestic violence.

Newham Labour Party was criticised for its role in the housing crisis and comrades in the Revolutionary Communist Group were on the megaphone when the march passed by a boarded up Newham Labour Party office.There was no one to be seen, perhaps they were hiding behind the boards…

The march finished up on the Carpenters estate because 3 tower blocks on the estate are still virtually empty. 400 flats have been left to rot by Newham labour party in the middle of one of the worst housing crisis this country has seen in a long time and one that continues to affect the most vulnerable people in our communities. Both Sam and Jasmin from the campaign spoke about the actions the campaign has taken to place the housing crisis on the political agenda in Newham and beyond. They then untied 100s of balloons which symbolized the 50,000 people who have been forced to move out of borough  (in London) during the past 3 years.