Lyn Brown, MP for West Ham in Newham, east London, was in the shadow home affairs team when Jeremy Corbyn was first elected leader of the Labour Party, she then resigned a year later after placing a vote of no confidence in Corbyn’s leadership but then was allowed to return as shadow minister for policing. 24 hours before the general election in June 2017, she was promoted to shadow Home Secretary as Diane Abbott was taken ill.

Focus E15 Campaign has had first-hand experience of her consistent attempts to dodge responsibility towards young mothers in her constituency who faced being socially cleansed out of London. We therefore register a  massive vote of no confidence in the decision to promote her.

Lyn Brown, MP for West Ham since 2005, was the local MP for the young mothers in the Focus E15 hostel. The mothers started campaigning in 2013 when Newham Labour Council withdrew funding from the hostel and the housing association tried to evict 29 young women and children out of London, to Manchester, Birmingham or Hastings, miles from family, friends and support networks…Lyn Brown did nothing to support the mothers and challenge social cleansing. The council’s solution was to push these young women into short-term expensive private-rented accommodation. Lyn Brown continued to ignore the problems despite meeting those directly affected at her surgery and at public meetings.

When approached at an International Women’s Day event in 2014, she accused the young mothers of being exploited by the campaign and tried to stop an independent journalist filming her. A year later, she offered a washing machine and a bed to two of the mothers in dire housing situations – empty promises that never materialised.

If Lyn Brown won’t represent the most marginalised in her own constituency, then we know what her positions will be in government or in opposition as home secretary.

In the words of a campaigner from Focus E15 Campaign:

‘People may think Jeremy Corbyn represents them but you only have to look at the new shadow home secretary Lyn Brown to see how unheard and let down working class people will be left once again by the Labour Party. We need to be organising on the streets and putting pressure on the people fighting for real change. Remember no one can represent us but ourselves.’

Read more about what happened when Focus E15 campaign met Lyn Brown at an International Women’s Day event in 2014: 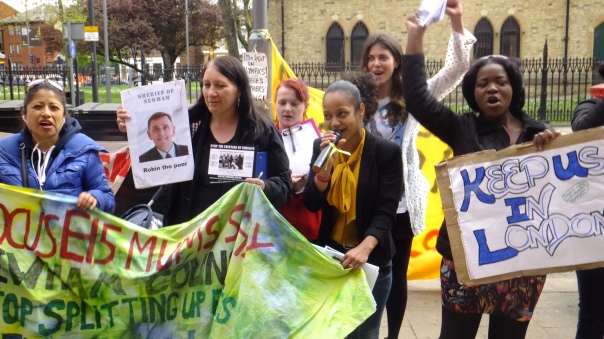