Focus E15 campaign has been working with residents from a hostel called Brimstone House in Stratford. People are living in this hostel with no end in sight as this ‘temporary’ accommodation stretches on for years. The residents are angry about their living conditions and are getting organised together as they want to move out, but they insist on their right to be housed in East London, near to their jobs, schools, families and support networks.

The following resident’s story highlights how being threatened with being moved out of London has an effect on mental health.

Focus E15 campaign caught up with this resident (who wishes to remain anonymous) at the Focus E15 street stall last Saturday.

A resident from Brimstone House’s story

This is a mother with a 5 year old child. She has been living in Brimstone house for 12 months and was initially told it was emergency accommodation for a short time only. However the council have subsequently told her that the accommodation is suitable as long term -temporary accommodation.She feels as if she was duped.

This resident  has depression and suffers from panic attacks. Due to this fragility her GP recommended that she is housed near her support networks in Newham especially considering she has a college place in Newham and her daughter has just started school. In other words her whole life is in East London.

She explains that she would be happy to be moved anywhere in East London, but that she does not want to be sent out of London.  If that were to happen she would loose contact with her friends and family who would not be able to afford to see her on a regular basis. She also does not want to loose her college place. If she was forced out of London she would be isolated and alone, with noone to help her look after her daughter if  she got sick.

However, to her complete horror the council, ignoring medical advice, offered her a place outside of London in Colchester in Essex. Her Doctor told her not to go and see the property due to her anxiety about train travel. This mother described a process and culture of being bullied to view this property out of London. She was told by council staff in the housing office that if she did not go to Colchester to view the property she would be evicted from Brimstone house and would be making herself ‘intentionally homeless’. She was also told that the council might only house her daughter and not her (this is someone in the housing department using the threat of social services to scare her). At this point her stress levels rocketed.

She got on a train to view the property in Colchester. Whilst trying to find the place that the council had forced her to view, she had a panic attack and ended up in hospital. A serious and disturbing consequences of the council ignoring known medical advice and it shows the stress that this young mother is under.

It seems as if the housing department are refusing to learn from this as she has subsequently been given another offer of a property outside of London in Tilbury. She has told Focus E15 campaigners that her mental health has deteriorated and is appealing this latest offer.

Join  the Focus E15 street stall this Saturday outside Wilko’s from 12-2pm. 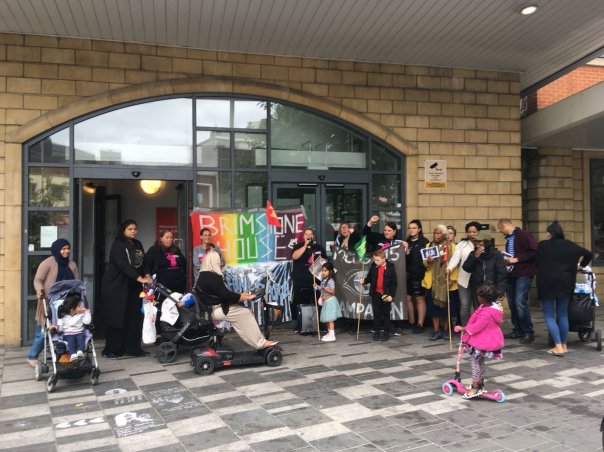 6 thoughts on “Newham resident bullied and threatened with ‘intentional homelessness’.”