This photo is a strong statement put out by Focus E15 campaign in September 2014. Taken on the first anniversary of the campaign, it shows the political occupation of empty flats on the Carpenters Estate in Stratford. It exposes the lies of Newham Council and Labour mayor Robin Wales, who continued then and continue today, to send people, adults and children, out of borough and out of London for housing, when there are perfectly good homes locally. This action highlighted the years of sustained work by the residents of the Carpenters Estate who have fought, and continue to fight, to save their estate, against all machinations of the council which reached a peak in the run up to the Olympic Games 2012. We will not keep our eyes of this estate.  Focus E15 campaign’s demand to Newham Council remains:
REPOPULATE – CARPENTERS ESTATE!

THIRD BIRTHDAY EVENT
Focus E15 campaign is celebrating its third anniversary and as part of a series of events, invites you to come and join us this Saturday 24 September 12-2pm outside Wilko’s on The Broadway E15 on our weekly stall, with open mic. Bring family, friends, bring stalls and leaflets, bring information and enthusiasm, bring resistance and strength, bring your housing stories and your reality – the fight for decent, affordable, stable, long term housing is underway and together we are stronger.

BOUNDARY HOUSE, WELWYN GARDEN CITY
No to Unsafe and Unsuitable accommodation
The residents of Boundary House are speaking out, fighting back, exposing the practices of the councils who have sent them miles from their families, support networks, schools, jobs etc to unsuitable, unsafe and unsanitary accommodation. In the next few weeks there will be a series of events culminating with a protest in Leyton, east London, on Friday 28 October to expose the role of Theori Investment, the housing management company working with local authorities to secure accommodation in places such as Boundary House.
No to Unsafe and Unsuitable accommodation – follow the residents’ fight on facebook and twitter.
https://www.facebook.com/boundaryhouseresidents/

EAST END SISTERS UNCUT
Congratulations to the sisters who celebrated nine weeks in a reclaimed space in Hackney, raising the issues of the cuts to services for women facing or fleeing domestic violence and winning significant demands from Hackney Council who have promised to fill all empty homes in Hackney by September 2017, stop using private hostels and B&Bs for domestic violence survivors, to provide specialist domestic violence training to all hostel staff.
Keep the pressure up and get involved.
https://www.facebook.com/eastendsistersuncut/

THE AYLESBURY
Last week the Secretary of State for Communities and Local Government, Sajid Javid, accepted the Government Inspector’s recommendation not to confirm Southwark Labour Council’s Compulsory Purchase Order on the homes of leaseholders on the First Development Site of the Aylesbury Estate regeneration. This is an important precedent and we need to understand what lies behind this unexpected decision.
Read more about this from Architects for Social Housing.
https://architectsforsocialhousing.wordpress.com/2016/09/17/financial-compensation-for-human-rights-the-aylesbury-estate/

Contact Focus E15 Campaign if you would like to show a film as part of Sylvia Screenings.

Sylvia’s Corner is opening it’s doors to show a selection of political films every month until the year end, with more films in the pipeline for 2017. All films will be followed by a discussion. The first film in the program is the truly amazing film about the 2002 coup in Venezeuala: The Revolution Will Not Be Televised. 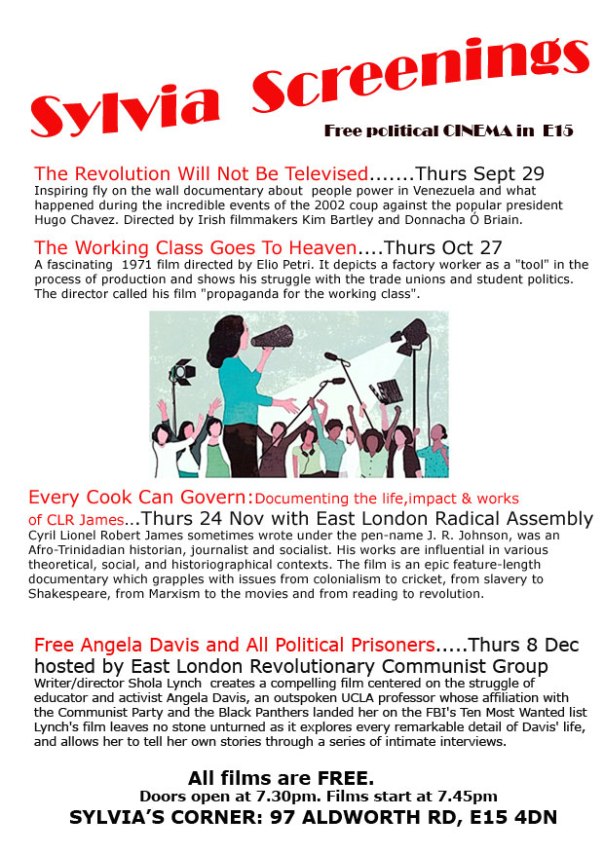