On our street stall recently Focus E15 campaigners met Ibrahim, a refugee who was left to sleep on the streets of the borough of Newham for months due to the inadequacy of the council and their unwillingness to give refugees and other residents in the borough stable, secure housing. Unfortunately it is clear that Ibrahim’s story is not an isolated case.

A crisis in housing has been unfolding for decades and is only set to get worse when the Immigration Bill  comes into law later this year. This Bill proposes to build on the measures in the Immigration Act and to extend document checks by landlords and banks to stop undocumented migrants from renting housing or opening a bank account. Landlords could have the powers to evict migrants without a court order making the present situation even worse.

The Focus E15 campaign believes that the recent request from the government to every council, asking them to house 10 Syrian refugee families, is not only inadequate, but shameful when the reason so many refugees from around the world have had to flee their homes is due to the wars waged in the interests of,(and financed by) our capital and country. We encourage people to stand together, as humans, to say 10 families per council is not enough. If our local council, Newham in East London really wanted to help refugees, they should rehouse people on the Carpenters Estate where 400 flats have been boarded up for several years.

We are demanding safe and secure housing for all who need it! So councils in London, in solidarity with people around the world needing safe stable homes, it is your responsibility to open the 22,000 empty homes in the capital and immediately start rehousing people.

Focus E15 campaign will be present at the demonstration for refugees in central London on Saturday 12 September. Please join us there.

UPDATE
We have recently heard that Ibrahim has now been given shelter in a hostel.This is because after passing our street stall he had the confidence to go to the housing office and not move until he was offered housing! Although a hostel is not ideal, it is safer and warmer than the streets. There are 100s of other like him who need support today. Please consider supporting the work of the  Hackney Migrant Centre or RAMFEL (Refugee and Migrant Forum in Essex and East London) 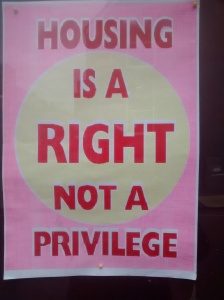