Charlie is 20 years old and has been homeless for over 2 years and he has now been street homeless  for 7 months.  He is originally from Southend and became homeless after his mother told him to leave the family house and not come back.

Charlie  has been sleeping in the doorway of Bridge House housing office in Stratford, as this is where he felt most safe at night. After a few weeks of seeing Charlie sleeping rough, the security guard brought someone from the housing office to see him.  This housing officer told Charlie there was nothing that could be done to help him because he is not ‘priority need’ which was the same line  he was fed in Southend.   Bear in mind that Southend council spent millions on the new pier and Newham council have left 3 tower blocks on the Carpenters Estate virtually empty for several years.

However, a week later Charlie received good news: he was told by a housing officer at Bridge House that in fact they may be able to find him somewhere to live after all.  They took his phone number and said they would be in touch. He immediately got his hopes up.

That was over 6 weeks ago now and Charlie has heard nothing since.  He still remains on the streets of Newham and is just one of the growing number of  rough sleepers in London:  last year 7,000 people slept rough in London.

Focus E15 campaign met Charlie on our weekly street stall when he came to sign our petition and buy a social housing badge. It is unacceptable that  a young man like Charlie remains vulnerable on the streets whilst at the same time thousands and thousands of homes in the capital lie empty.

“Homelessness is a devastating experience with significant impacts for an individual’s health and wellbeing. Mental and physical health problems can be caused or exacerbated by rough sleeping. Homelessness is also dangerous, with homeless people 13 times more likely to be a victim of crime than the general public. Shockingly, the average age of death for a homeless person is just 47 –  30 years younger than the national average.” St Mungo’s

Newham council must make sure our young people are safe and can move forward with their lives.
House Charlie now and stop making people homeless!
Social Housing not Social Cleansing! 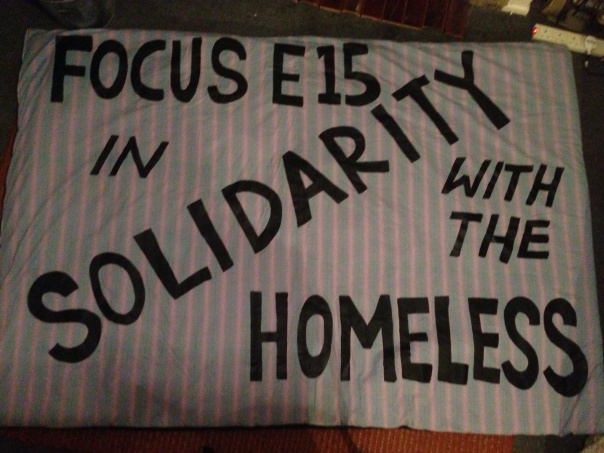